Kanye West & Lil Pump’s “I Love It” has the biggest global debut for a hip-hop video.

Kanye West and Lil Pump’s “I Love It” is now the biggest global debut for a hip-hop video on YouTube. The video garnered 76M views within the first week which surpasses the record previously set by Childish Gambino‘s “This Is America.” In addition to record-breaking first-week numbers on YouTube, the single has reportedly also garnered over 115M streams globally across all streaming platforms. It’s a polarizing song but clearly, Kanye West and Lil Pump put together something infectious. 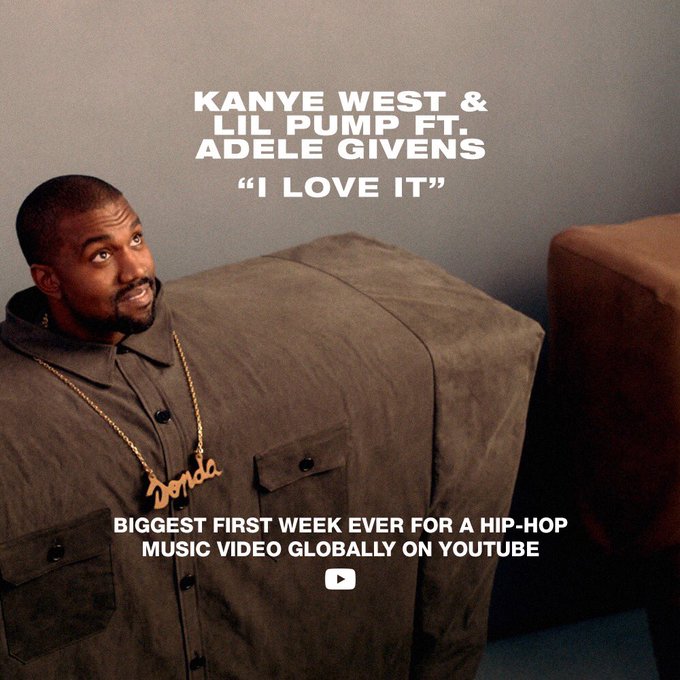 .@kanyewest’s & @lilpump’s “I Love It” has the biggest debut EVER for a hip-hop music video on @YouTube.

According to Billboard, Kanye West and Lil Pump’s “I Love It” is expected to debut in the top 40 of the Billboard Hot 100. Billboard said that it has much to do with the 20M+ streams it received within the first week in the U.S.

Lil Pump isn’t the only new artist Kanye’s been working with. Over the past week, Kanye West and 6ix9ine have been spotted hanging out together including in the studio. Kanye was also in Colombia this past week where he was, again, spotted in the studio with Tekashi 6ix9ine. It’s unsure when that collaboration will be released but we hope it comes with a visual as meme-able as “I Love It.”